How does electronic scale protection work?

Scale deposits inside of pipes or on heating elements create many problems: The longer you leave your scale problems untouched, the more damage the scale will cause to your system. This could lead to a replacement of the piping system and new equipment. So, water scale prevention is important.

How can calmat® solve these problems?

Without the calmat® water treatment, the scale particles in the water form sticky crystals that then build solid deposits. The patented calmat®-Impulse-Technology modifies the crystallization of calcium and magnesium using the natural process of electrophoresis. The crystals become smoother and rod-shaped and can no longer attach to each other. Scale is now washed away in the water as a fine powder. The formation of new deposits is stopped. The more rod-shaped crystals that are created, the stronger the positive effect of scale-prevention.

Mono crystals as a result of the calmat® water treatment
When mono-crystals are created by the impulse variation, it is important that they grow as long as possible before they start their way through the piping system. The larger the crystals, the longer it takes until the crystals fall apart again and eventually "die". In warm water, these crystals grow faster and therefore are stronger and live longer. This explains why the calmat®-effect lasts the longest in warm water (up to seven days) and shorter in cold water (approx. two days). 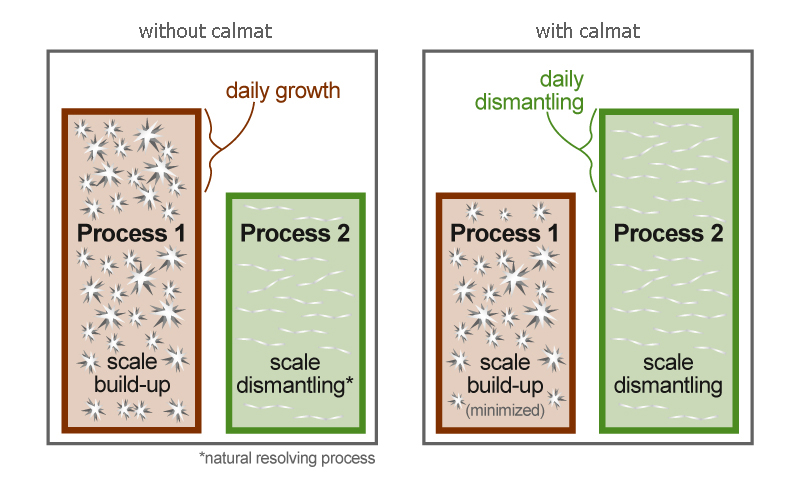 The calmat® water treatment changes the balance between the scaling process and natural resolving process. The nano crystals can no longer form deposits, therefore the scale build-up of the first process is reduced. The natural scale-resolving-process now needs only to deal with existing deposits and can effectively combat them. Thus scale is removed faster than it forms. The natural surplus of carbonic acid dissolves the scale from the scale. Gradually and carefully, the deposits in the pipes will be removed.
The removal of scale = the removal of rust
As soon as scale deposits have built up, iron particles imbed into it. Thus, the scale and the rust blend into one material that are seen as red-colored deposits in the pipe. When the calmat-treatment dismantles the scale, it simultaniously removes all rust with it.
Clearing out the deposits is a gentle process where scale is brough back into solution and washed out in the water as as : calcium, magnesium and iron. It is absolutely save to drink as these are all healthy minerals.
The removal of scale = the removal of bacteria
We know that scale acts as a breeding ground for bacteria and other unwanted substances. As soon as calmat is installed and the scale is cleaned away, the bacteria breeding ground disappears. This way, bacterial contamination is greatly reduced or even fully removed.

Copper and/or iron oxidation occurs in all metal pipes through contact with calciferous (hard) water. These oxides seriously affect the pipe surfaces and may lead to corrosion. The calmat-impulse-technology generates an electrophoresis-effect which produces a protective metal-carbonate layer. According to the material of the pipe, this layer consists of copper-carbonate, iron-carbonate or zinc-carbonate and settles on all shiny metal surfaces. It protects the pipe from aggressive substances which could lead to corrosion.

calmat® benefits for your private home


The piping system in your private home

Water heaters
calmat® controls scale build-up in tankless water heaters permanently and reduces constant maintenance as heat exchangers get fewer deposits. Your water heater will work much more efficiently once again, and you can extend the time to your next service maintenance.

Heating systems regain full performance
When water is heated in a hot water tank the hard water always leads to thick deposits on the heating elements. This layer inevitably causes a great reduction in the capability of the heat to transfer. With calmat, deposits are minimized and your heating performs at a much higher capacity again. Service maintenance intervals are extended. Typically, water heating bills will be substantially reduced.

calmat® does not alter the chemical composition of water, and calcium and magnesium remain in the water. You will quickly notice that scale is visible but acts like a fine ‘dust’ which can be removed easily with a damp cloth. Stains on basins, sinks, toilets or fixtures will be easily wiped away. Shower heads stay clean longer. Soap and detergent use can be cut back by up to 25%. The water will feel as if it is "softer" as the treatment causes a decrease in water surface tension. Generally, soap will lather up more. Skin will feel smoother and hair will be much more manageable because the scale particles no longer make it so frizzy.

Garden irrigation with sprinklers becomes more reliable as the nozzles stay free of scale longer. calmat®-treated water can be absorbed and processed better by plants. As there are less scale spots on the leaves your plants take up water and rain water better and look healthier.

calmat® makes pool cleaning much easier: scale on the water line is looser and easier to wipe off. Pool covers and tiles on the floor or walls will show less hard scale stains. calmat reduces deposits in the pipes and valves. The sensitive circulation pumps last longer, sand filter need less changing and you can cut down on chlorine tablets.

The combination of water, circulating air and pressure in a hot tub tremendously enhances scale build-up. calmat® makes the cleaning of the tub easier. calmat reduces deposits in the pipes and valves. Covers and and tiles on the floor or walls will show less hard scale stains.

Mineral rich drinking water
calmat does not interfere with the natural composition of the drinking water. Important minerals remain in the water for a healthy diet. Especially young children and elderly people benefit from the healthy calcium and magnesium content that naturally is found in tap water.

Water tastes and smells better and gives food and beverages its natural flavor
calmat keeps the natural taste of water as it does not change its chemical composition. This gives you the best tasting water possible. calmat cleans the piping system once again and therefore cleans it from rust particles. Rust is gone and can no longer add its unwanted flavor any more.

There are no additional posts